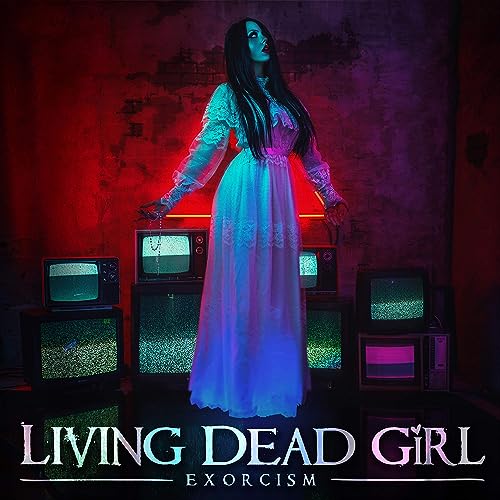 Some bands are hard to peg, or they're hard to understand until you actually hear them. When a band like Living Dead Girl comes along, saying their music is an amalgam of goth-inspired metal and Avril Lavigne, it takes a moment or two to process exactly what that would mean. And then you throw in the fact the band is borrowing their name from one of Rob Zombie's big hits, and you wind up with quite the kaleidoscope of ideas being mixed together. As we saw with Poppy last year, it's not an easy feat to pull off, especially on a debut record.

Molly Rennick is more shrewd than some of the others who have been mixing metal and pop. Yes, that's mostly about Poppy, but not entirely. On this record, Living Dead Girl doesn't take bits of metal and pop and glue them together whether they fit or not. The integration of metal attitude, screams, and pop hooks is handled in a much more unified way. That not only makes it easier to pull out the thread of who the band is trying to be, but it also keeps the record from feeling like an experiment thrown together at the last minute.

To my ears, the record sounds like New Years Day's "Unbreakable", with the ends pulled further apart. These songs veer heavier in their more metallic moments, and Molly screams her way through many of the verses, which plays up the duality of the pop hooks. That decision is wise, not just for the dynamics at play, but because the songs need that bit of psychology to make their mark. Staying with that comparison, the pop hooks on this record aren't as mammoth as New Years Day had, but the huge shifts in tone give the impression they are.

For the most part, the album works as intended. It uses the bones of the metalcore formula, but with a youthful approach that updates it for the times. I don't know if any of those original bands would have wanted to combine hardcore with Babymetal, but there are hints of that throughout Living Dead Girl's music. I find out just how old I am during "Exorcism", where Molly's vocals sound as childlike as ever, and where the second half of the chorus sounds too much like a childish chant for me. That song will probably play well for the listeners in her own age bracket, but I certainly feel out of place listening to that one.

I made a comment as the last decade ended that music stopped being identifiable as of a certain time sometime around 2000. There were definite, unique sounds to the music that came from the 60s, 70s, 80s, and 90s, but not so much anymore. I feel like with a few more bands taking this approach, Living Dead Girl is still riding the front of a wave that could be one of the defining sounds of this decade in metal circles.

As for "Exorcism", it's a debut album that displays a lot of potential. The pieces to the puzzle are all here, and a lot of them have already been fit together. If there can be even further polishing of the pop aspects, Living Dead Girl will start crossing over and generating attention. This record is both more metal and more pop than Poppy. The only thing giving her more attention is a public battle about control and abuse with a collaborator. If the music was speaking for itself, Living Dead Girl would be the one fans of the style would be talking about.