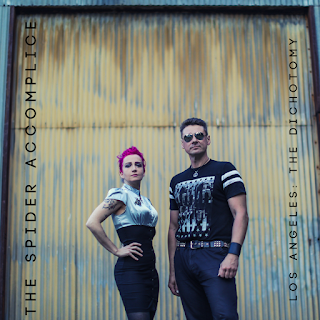 Over the last three years, the fabric of music has revealed plenty of amazing artistry, as well as snarled weaves that are destined to fray and break. The thread that has proven most interesting to me is that of The Spider Accomplice. A band that I was turned on to the way such things always happen, by an earlier collaboration with a member of a band who I had a slight infatuation with at the time, the odd way of arriving with the band's first EP was rewarded as fate when the results were heard. On the first two installments of the "Los Angeles" trilogy, The Spider Accomplice made music that resonated with me, stuck with me, and established themselves as one of the most exciting new bands in quite a while. If they were already scaling such heights, what can the next step bring?

The Spider Accomplice gives us more with this closing chapter of their trilogy. More what, you ask? More of everything. "The Dichotomy" is bigger, bolder, more dramatic, and more beautiful. To borrow an image from the first EP of the cycle, if The Spider Accomplice started out as a brightly colored caterpillar, they wound themselves into a cocoon of stunning silk in the middle, and now have emerged as a butterfly too vibrant to possibly be real. The colors look like a fiction created by artists working on a vivid canvas. Bands grow, they evolve, but the process is usually slow and subtle. The Spider Accomplice says to hell with that, and before our eyes has transformed themselves into a band that has fused the visceral and the artistic.

We got our first taste of this (pardon the pun), when they released "Swallow" on Christmas. One of the best songs of the year (#3 on my list), it showed the band's sound getting tighter, brighter, and more textured. That feeling carries over to this EP, which site as a fitting crescendo to the "Los Angeles" story.

Everything we loved about the band before is still here, Arno's inventive guitar work and VK's passionate vocals and lingering melodies, but there is more added to the mix. They trade in some of the Offspring-style punk influence that had been felt for something more grand, and you could say more mature. "The Dichotomy" features strings, pianos, more guitar solos, and a weight that feels bigger than anything they have done so far. From the opening call-to-arms that introduces "The Fall Of The Copper Queen", straight through to the wrap-up of "Epilogue", we get sounds that rival anything Muse has done to become as big as any band on the planet.

You can never figure just where the band's sound is going, which makes them exciting to follow. There's plenty of alternative rock propelling them, but there are drips of modern pop/rock, symphonic rock, and even 60s psychedelic pop that twist and turn, often within the same song. So often we hear bands get complacent once they find a sound that works for them, never deviating from giving their fans what they already expect. The Spider Accomplice challenges themselves, always seeing what else is possible. That's how they get from "Calico Concrete" in 2015, to "Bromelaid" in 2016, to "End My Life" now. With each release, they dig deeper into themselves, and we get to go along for the ride to learn what lies under each layer.

It's not often that I don't find myself saying, "but", yet that's where we are, because the only gripe I could find isn't even a gripe about this EP. My lone disappointment listening to these tracks is that one song they introduced as an acoustic performance last year isn't included. A more minor complaint might not even register on my mind.

I feel like I've been saying this with each release, but this EP feels like a shot across the bow of modern rock by a band more deserving of airplay and acclaim than any household name. I can't listen to the swell of strings and VK's voice wring the drama of "End My Life" without imagining the song filling a massive venue. Perhaps the irony of the title, "The Dichotomy", is the comparison of how many people will hear this music versus how many should and need to.

I have been cheerleading for The Spider Accomplice from the start, because I have believed in them and the music they have made. "The Dichotomy" doesn't just pay me back for the faith I have placed in them, it makes a statement that The Spider Accomplice is the biggest little band in the world. This is absolutely stunning.

*Editor's Note: The three EPs in the "Los Angeles" trilogy, if compiled into a single album, would be a favorite to be album of the year.
Posted by Chris C at 8:29 AM