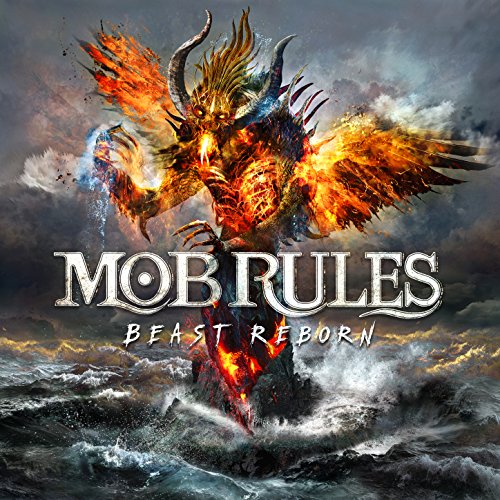 Sometimes a band drifts in a direction, or does something specifically, that makes you scratch your head. That happened to me with the previous Mob Rules album, where they went from power metal stalwarts to being almost a clone of later Iron Maiden. I didn't mind that, since I like that era of Maiden quite a bit, and the songs Mob Rules came up with were pretty good. But in the time since then, I haven't gone back to that record at all, because if I want to hear something that sounds like Maiden, I'll just listen to Maiden. Their shift in that direction sapped their own identity away, and I'm not sure how they wound up cloning someone else, since they have been around for long enough to have figured themselves out. Anyway, a new album could change that up, or it could continue them down that path. Let's find out.

After the obligatory intro, the record starts off with "Ghost Of A Chance", which has hints of Maiden again in the guitars, especially the harmonies, but retains more of Mob Rules' own identity. They're able to fuse some of those classic guitar parts with a chorus that is bigger and hookier than what they would come up with if they were pulling too heavily from the playbook.

Thankfully, they are able to stick to their own guns through most of the record. There are moments here and there when the guitar runs are a bit too obvious where they got their inspiration, but largely the band sounds like themselves again. There's a hint of pompous, symphonic flair to the tracks, as they try to make the choruses sound as grand and epic as they possibly can. There are times when that works exceedingly well, and other times when they might be trying a hair too hard.

Ironically, it's in the tracks with the heaviest Maiden influence that the music hits hardest. Those are the songs where they hit on something more interesting than the traditional power metal instrumentation. When they can combine that with a bigger chorus, that is when they are at their best. There are some of those moments on this record, but maybe not quite as many as I would have hoped for.

What is a bit difficult about this record is that it makes me of two minds; on the one hand, I want to commend the band on making a solid record that is much more their own this time out, but on the other hand, I want to say the previous album was a better overall effort. I'm not sure what it means for me to be saying an album I thought was a bit too heavy-handed with its influence was a better one than this effort. I wouldn't read to much into it, since I can't tell if I'm intending anything other than the obvious comparison.

So, "Beast Reborn" is a solid Mob Rules album. It sounds more like the band used to than when we last heard them, which is probably a good thing, even if they have to take a slight step back before they can move forward again.
Posted by Chris C at 8:30 AM