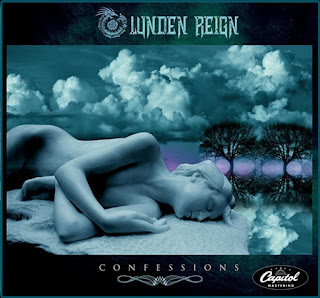 There are bands and records that come along which make me look forward to the future. They are new artists who stir something in me, and make me excited about the future of music. Now, the truth of the matter is most of these bands wind up disappointing me in the long run, because I am rather persnickety, and because consistently writing great music is hard. It just is. So when you come across a band that can deliver more than once releases that you love, keep in mind just how rarely that can happen.

A couple of years ago, Lunden Reign was one of those bands for me. Their record, "American Stranger", was one of my favorite albums of 2015. They were on the edge of the movement making classic rock relevant again, and they updated it to the modern age better than nearly anyone. Their sound, their songs, and their message all stuck with me. So I was holding out hope that when they returned, they would be one of those bands that could strike lightning twice.

"Confessions" is a bold step forward, and is anything but a sequel to "American Stranger". That is an artistic choice that is daring, and also one that pays off in spades. Rather than writing another classic rock record that pays homage to the 70s, they have moved forward a decade, making an album that looks fondly to the 80s, pulling in synths to create a layered sound that even more fully embraces melody.

We heard this first in the single that was released last year, "Red Wagon", which was a natural progression from the first record to this new one, and hit the mark as one of their best songs. What these new songs all have in common is an ear for melody, and a sense of care and craft in constructing this record. You can hear how important these words and these songs are to the band, which is refreshing when you come across so many albums that appear to be written for no other purpose than having new songs to play. "Confessions" means the world to Lunden Reign, and you can hear that authenticity and truth come through.

The record has a strong diversity to it, from the dreamy pop hooks of "Stardust Daze", to the soaring "Red Wagon", and the gritty heaviness of "Dead Man Walking". Throughout the album, the songs meld Laura's skillful guitar playing, which layers textures in a way that builds rich songs (a deceptively difficult skill that gets far less attention than flashy solos) with Nikki's passionate vocals. Nikki continues to be the band's trademark, with her Sheryl Crow meets Stevie Nicks voice sounding like nothing else in this genre. These songs were smartly written to play to her voice's best qualities, and she nails her performances.

Classic rock influenced bands are often copycats, bands that act as if having the right guitar tone and production are all it takes. Lunden Reign are not that. They use their influences to speak their truth, and that message is what makes them important. They aren't a band writing songs about rocking and partying, filling albums with songs that are ultimately meaningless. They are, to borrow their own term, confessing to the audience. That takes strength, and it's admirable.

"American Stranger" was one of my favorite records of 2015, and "Confessions" is every bit as good an album. It has a different appeal, but I find myself wanting to come back to it, which is the hallmark of a great album. I said then that Lunden Reign was a band with a bright future, and now that we're living in it, I was right.
Posted by Chris C at 8:33 AM