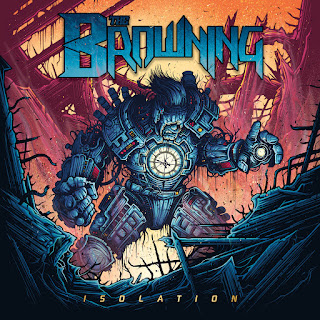 Yes.  Yes.  Yesyesyes.  This is the kind of album that I, not to make it about me, but I have been hoping for in the last couple years.  The virile surge in popularity of electronic dance music meant that a combination of that music and metal seemed an almost inevitable experiment – too much influence, too many musicians willing to take a chance, too many groups not of my generation coming of age in an electronic era for this not to happen eventually.

There are those who would suggest that industrial already had this anticipated concoction covered and while that particular subgenre admittedly utilizes many electronic elements, it is distinctly different from EDM in color and tone.  The closest attempt in recent memory to create a true synthesis of the styles came from Exotype’s record a couple years back, which proved to be an important proof-of-concept, but lacked the consistency and discipline to really establish a beachhead.

From the American Midwest, perhaps the least likely of all origin points, comes The Browning with another record.  The band originally formed as a one-man army in 2005, became a ‘band’ in 2009 and since then has released three records, including this new effort, “Isolation,” the first under the Spinefarm Records label.  In the intervening years, the band has seemingly changed a hundred members a hundred times, but through it all they continue to produce new music.

What pops first about “Isolation” is that there’s real harmony here between the metal(core) and the edm, which likely comes to most listeners as a surprise.  One aspect does not work in support of another, they blend and entwine in musically appropriate ways that give the record a full sound.  “Dragon” is the best early example of what we’re talking about; an arcing electronic line played in companion step with a deep, thunderous metal chug.

The Browning makes their album work but not trying to do too much – they keep their rhythms simple and let the novel juxtaposition of sounds speak for itself, which is a workable formula.  The blending of styles within the simple melodies is practically seamless, “Pure Evil” just one example of the nearly flawless synthesis that The Browning is capable of.  There’s no ‘metal side’ or ‘edm side’ to the best moments of “Isolation,” the music simply is and asks you only to take it on face.

Now, before we get carried away, “Isolation” is not a perfect record, far from it.  It has real, tangible problems with pacing, and the vocal performance is dry in that it is one growled scream all day, all the time.  Also, the simplification  that occurs in order to make the synthesis of elements work means that by the end of the record, there’s a feeling of hearing the same thing over and over again, which loops back into the pacing problem – a lot of these songs slow down for long stretches and wallow rather than engage.  “Fallout” and “Vortex” and “Spineless” are all listenable as individual pieces, but taken together the distinction of each piece fades away dramatically.

Nevetheless, one hopes that “Isolation” is the prototype from which more of this kind of experimentation can occur.  The Browning is showing that the concept has life and can be eminently well crafted and enjoyable, even with the record’s unabashed flaws in tow.  In the metallosphere there’s often an outcry for something innovative and different – “Isolation” is both of these.