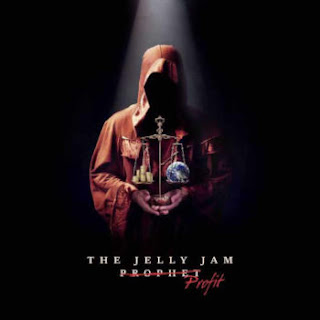 As a rash youth, the phrase “progressive super group” would have just about tested the limits of my musical tolerance, two out of the three words being catalyzed trigger words that would have sent me on a tirade railing against my friends who held things like time signature and poly-rhythm over the heads of ‘normal, shallow, pedantic’ music listeners.

Thankfully, we’ve all grown some and learned that musical definitions are malleable in ways that most other definitions, even artistic ones, are not, so therefore, the idea that King’s X, Winger and Dream Theater could get together and produce material worthy of accolade is much more inviting.  Thus, The Jelly Jam releases their fourth album unto the world and first since 2011, “Profit.”

“Profit” is a concept album meant to not subtly react to the conditions of our times.  It follows the path of ‘The Prophet’ a luminous but weighty harbinger of truth who corrals his Followers (the capital ‘F’ is theirs, not mine,) in an effort to save the world from the aptly named ‘Those Who Will Not See’ and ‘Profiteers.’  The album’s message is one of a dying world subject to destruction due to both environmental and sociological factors, unless The Prophet and his Followers can utilize truth to change the world in short order.

Cynics might make an argument here that “Profit” contains a certain amount of philosophical determinism – that those who value wholesome truth are followers anyway, just followers of a different singular identity who still lack the power to determine their own destiny.  While the Prophet is more likely a convenient way of more easily crafting a narrative around a single entity, there is some weight there, as The Prophet’s followers are called, well, The Followers.

But none of that has anything to do with the music contained herein, which, to some surprise, sounds vaguely reminiscent of the later works of Alice In Chains, and not especially like any of the bands that make up The Jelly Jam.  This is not AiC in that there are long lamentations of wrought and wretched emotion crawling through the muck, but in the sense that the music is very much played out in low tones with quiet power.

The connection occurs most notably twice – first for “Stain on the Sun” which uses a low key, melancholy delivery in much the same fashion as we experienced with Alice In Chains’ “No excuses,” or “Heaven Beside You,”  though without the jangle of acoustic guitar.  Nevertheless, it is the tone of Ty Tabor’s voice that sells a similar story.

The second such similarity comes later for The Jelly Jam’s “Mr. Man,” which thuds heavily with the kind of recurring, infectious thump that Jerry Cantrell infused into classics like “Again” and “Get Born Again.”  “Mr. Man” strikes as the album’s most memorable song, in good part because it stands in heavier contrast to the other tracks.

The Jelly Jam, for all that “Profit” reminds of days gone by more than it is given to flights of progressive fancy, does occasionally find itself in the trap that consumes any number of otherwise talented prog acts, which is that they can get caught in a loop with no exit.  Some of the later cuts on “Profit” like “Permanent Hold” or “Fallen” give way to long musical diatribes that are intricate yes, but repeatable and not wholly exploratory, which makes the pieces drag on unnecessarily.

“Profit” is a fine concept album and a solid lesson in why the tags of genre should not be feared, as the ‘progressiveness’ here is not the high-end flights of fancy that are so often associated with King Crimson or Yes.  That said, the music of The Jelly Jam in this particular instance is interesting but not satiating.